Finance is defined as the management of money, and it includes activities such as investing, borrowing, lending, budgeting, and saving. Finance originates from the French word "Finer," which means "to end" and "to pay." “To end” in this perspective means to settle a dispute or debt that is due. Adapted into English, finance means the management of money. Finance is the lifeline of all activities; economic, social, and administrative. Finance function can be seen in all activities and processes, from savings to financial institutions and governments taxes. Finance is closely related to money because it’s a means of exchange.

What is Traditional finance/Centralized Finance (CeFi)?

The traditional financial system consists of banks and financial institutions as the main pillars of its operating mechanism. We all have at least one or probably more than one bank account and are using banking services like financial transactions, credit card payments, ATM withdrawals, among others. Banks are quite a powerful constituent of the overall economic scenario, and thanks to globalization, we have today many global banks operating in different parts of the world. The history of traditional finance began in 1694 when the Bank of England was founded to look after the gold of businessmen traveling to the country. Carrying gold around was inconvenient and exposed individuals to the vulnerability of being attacked or mugged. It made a lot of sense to businessmen to store their wealth in a secure vault while carrying out their business. Businessmen were given a receipt for their gold, which allowed them to redeem their precious metals upon exiting the country.

Today, if you want to access financial services such as borrowing, lending out money, earning interest on savings, investing some money, or applying for a mortgage, the first option is to go to your local bank, where you would need to provide proof of identity, address, employment among many other details before an account can be opened for you. Other options could be through a financial advisor or a broker. The current traditional financial system relies heavily on banks and financial institutions to provide these services to its customers. Despite a century of innovations in the traditional financial system, it is still far from perfect; settlement of stocks, bonds, and other financial instruments takes days to clear and requires a massive amount of human capital to be involved in the process.

Criticisms of The Traditional Finance System. 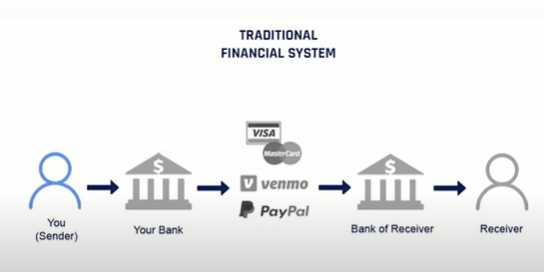 In Defi, a smart contract replaces the financial institution in the transaction. A smart contract is a programmable contract that can hold funds and send or refund them based on certain conditions. No one can alter a smart contract when it's live; hence it will always run as programmed.

Decentralized finance started gaining prominence as a replacement for the traditional finance system in 2018 when 15 Ethereum-based projects came together with the aim of building an independent, secure, and open financial system. Some of the early proponents behind the Defi movement included MakerDao, Origin Protocol, and Paradigm.

Defi may increase the efficiency, transparency, and accessibility of the financial infrastructure.

Despite all these promising possibilities, we also see that a fully decentralized financial world still seems to be a vision of the future.

The technology behind the decentralized finance application is still underdeveloped and unfriendly, and it will always be prone to vulnerabilities that would damage the technology’s reputation. It is important to note that the Defi space is still in a developmental stage, and as such, it is bound to overcome the majority if not all the current hurdles it is currently facing. We are also bound to see a gradual but decisive shift from the traditional finance system to the decentralized financial system. This is due to the continuous failings of centralized bodies such as governments and banks. The financial crisis of 2008, where many people lost their fortunes as a good number of banks went under, is a prime example of the numerous failings of the traditional financial system. Concerned by the threat posed by the current traditional financial systems, many people are looking to emerging technologies to shield themselves, and this is where Defi comes in to shape the future of our financial systems.