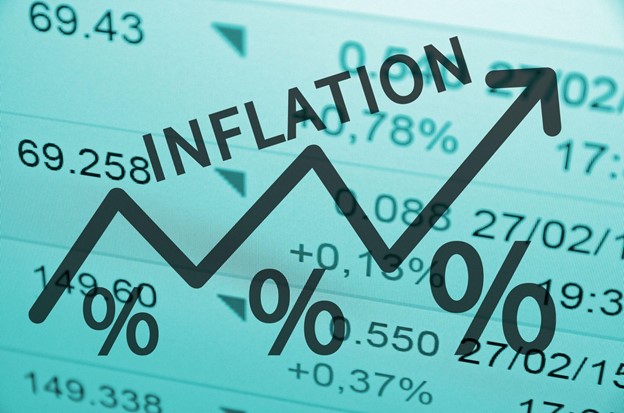 One of the oldest and most constant things about economic life is that prices of goods and services keep rising. For example, a few years ago, a bag of water used to be sold for just 80 Naira, but today if you get a bag of water at 150 Naira, you would consider it an excellent bargain. This constant rise in prices can be credited to an economic term known as INFLATION.

Inflation can be defined in many ways; it can be defined as a decrease in the purchasing power of a currency; it can also be defined as an increase in the general price level of goods and services. Both definitions essentially mean the same thing; When there is inflation in an economy, the value of money decreases because a given amount of money will buy fewer goods and services than before due to a general increase in prices of goods and services. Although consumers generally hate rising prices, economists believe a moderate degree of inflation is healthy for a nation’s economy. Usually, central banks aim to maintain inflation rates within 2% to 3% and a significant increase beyond this range can lead to fears of possible hyperinflation, a devastating scenario in which inflation rises rapidly out of control.

The task of defining inflation although daunting is relatively easy compared to giving a reason as to why inflation occurs. Several economists are of different schools of thought as to what causes inflation. Although numerous theories exist, arguably the two most influential schools of thought on inflation are those of Keynesian and monetarist economics.

This is when the cost of production (or running a business) rises and it's then passed on to customers. There can be a lot of reasons for the rise in prices ranging from:

When the cost of these factors rises, producers wishing to retain their profit margins must increase the price of their goods and services. When these production costs rise on an economy-wide level, it can lead to increased consumer prices throughout the whole economy, as producers pass on their increased costs to consumers. Consumer prices, in effect, are thus pushed up by production costs. Cost-push inflation occurs when overall prices increase (inflation) due to increases in the cost of wages and raw materials. Higher costs of production can decrease the aggregate supply (the amount of total production) in the economy. Since the demand for goods hasn't changed, the price increases from production are passed onto consumers creating cost-push inflation. The most common example of cost-push inflation occurs in the energy sector – oil and natural gas prices.

When global policies, war, or natural disasters drastically reduce the oil supply, gasoline prices rise because demand remains relatively stable even as supply shrinks. For example, in the early 1970s OPEC imposed an oil embargo on the United States and some other countries; what followed was. The impact of the supply cut led to a surge in gas prices; the price of a barrel of oil skyrocketed from $3 to $12, as well as higher production costs for companies that used petroleum products.

Demand-pull inflation occurs when there is an increase in the number of people who want a good or service whose supply can’t keep up. Demand-pull inflation is the tendency for prices to increase due to increasing aggregate demand, or the amount of goods and services the entire population buys. The most common cause of demand-pull is a rather good thing; it is usually associated with a strong economy. When an economy is thriving, employment rates tend to increase; as such more people make money, and as a result, they spend more money. In Keynesian economic theory, an increase in employment leads to an increase in aggregate demand for consumer goods. In response to the demand, companies hire more people so that they can increase their output. The more people firms hire, the more employment increases. Eventually, the demand for consumer goods outpaces the ability of manufacturers to supply them. There are five causes of Demand-Pull Inflation:

As its name suggests, monetarism is concerned principally with the role of money in influencing economic developments. Specifically, it is concerned with the economic effects of changes to the money supply. Monetarist economists believe inflation stems from the expansion of the money supply and that central banks should maintain stable growth for the money supply in line with GDP. If the Money Supply increases faster than real output then, ceteris paribus, inflation will occur. If you print more money, the amount of goods doesn’t change. However, if you print money, households will have more cash and more money to spend on goods. If there is more money chasing the same amount of goods, firms will just put up prices.

According to the man credited for the monetarist school of thought; Milton Friedman, “inflation is always and everywhere a monetary phenomenon.” This view is in contrast to the Keynesian school of thought. The monetarist believes the underlying principal factor causing inflation has little to do with things like labor, materials costs, or consumer demand. Instead, it is all about the supply of money. Monetarists argue that if the Money Supply rises faster than the rate of growth of national income, then there will be inflation. If the money supply increases in line with real output then there will be no inflation. The monetarist's theory has come under serious criticisms because in practice the link between the money supply and inflation is often very weak. Also, the large increase in the monetary base following the 2009 recession did not cause any inflationary pressures.

The optimal inflation rate is often considered to be around 2%. This is because when inflation is above 2%, inflation expectations will rise and it will be harder to reduce inflation in the future. Keeping inflation less than 2% will keep long-term expectations low. There are four main types of inflation, categorized by their speed. They are creeping, walking, galloping, and hyperinflation.

Inflation is a constant concern because it makes money saved today less valuable tomorrow. Inflation erodes a consumer's purchasing power. For example, if a bank customer saves a sum of money in their savings account with an annual interest of 2.5%, if at the end of the year the inflation rate of the country is higher than 2.5% the customer has made no profit from saving his money and the value of the money saved is now even less than when it was saved. Inflation is an enemy to a saver. Fiat currencies such as the US dollar, Nigerian Naira, British Pounds are inflationary by design so that people don't hoard currency because the more your money loses value every year, the less likely you are to keep it sitting in a bank. This availability of money in the market encourages the growth of the economy. This ability of the central banks to print fiat currency at will is also the major undoing of fiat currency as governments in a bid to stimulate the economy could print too much fiat currency resulting in inflation or in some cases hyperinflation. Amongst the countries with the highest inflation rate are Yemen with 26.18%, Venezuela with 2335.15%, Iran with 36.5%, Zimbabwe with 557.21%, Nigeria with 16.5%, Angola with 22.8%, Turkey with 13.25%.

Deflation can be caused by a combination of different factors, including having a shortage of money in circulation, which increases the value of that money and, in turn, reduces prices; having more goods produced than there is demand for, which means businesses must decrease their prices to get people to buy those goods. Economists agree that the two major causes of deflation in an economy are:

Deflation is considered an adverse economic event and can cause many negative effects on the economy, including;

One attribute that has made crypto assets, particularly bitcoin so appealing to investors is that they are more resistant to inflation than fiat currencies. Usually, with Fiat currency your purchasing power decreases over time, however Bitcoin on the other hand has generally increased in value, going from virtually worthless in 2010 to more than $60,000 in 2021 at the time of writing. Cryptocurrencies aren't immune from experiencing the effects of inflation, however, they just have better and more effective mechanisms set in place to control it. Even Bitcoin experiences inflation as more of it is mined (as does gold). But because the amount of new bitcoin is automatically reduced by 50 percent every four years, Bitcoin’s inflation rate will also decrease.

Traditional Fiat currencies such as the USD, EUR, GBP, NAIRA, etc, are inflationary. What this means is that there is no limit to how much currency is created and can be on the market at any given time. If a system needs more currency, the central bank will introduce more bills and coins thus aiding the economy that uses this specific currency. However, the main issue with inflationary currencies is that, as the supply of currency grows, its value decreases.

Determining which of the two models works best for cryptocurrencies is difficult as both have their pros and cons. At this point, a deflationary cryptocurrency may seem like the more reasonable option if we can assume that its value will rise as the supply rate decreases and eventually comes to a halt. However, one major criticism this model has received is that it creates a hoarding culture so that no one will want to spend money that appreciates.

It’s more likely that price volatility is more of a threat than deflation to bitcoin right now. Bitcoin is quite dividable. This could play a factor since a virtual currency is much easier to break down into smaller parts than that of today’s fiat system. Bitcoin is currently divisible down to .00000001 of one BTC. That seems like a small amount right now, but someday it could prove to be useful.